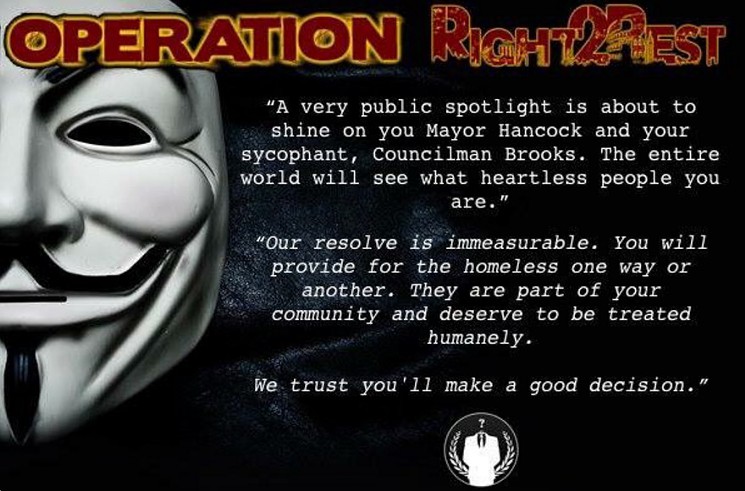 Anonymous has released separate videos for #OpRight2Rest. They target the City of Denver and the Tattered Cover bookstore. #OpRight2Rest will take place against the criminalization of homelessness in Denver.

It has come to our attention that you continue to deny the homeless of your city their basic human rights, as well as rights guaranteed by Amendment 8 of the United States Constitution, as verified by the Justice department in its statement.

“It should be uncontroversial that punishing conduct that is a universal and unavoidable consequence of being human violates the Eighth Amendment. Sleeping is a life-sustaining activity, it must occur at some time, in some place. If a person literally has nowhere else to go, then enforcement of the Denver Urban Camping Ban against that person criminalizes them for being homeless.”

“Many homeless individuals are unable to secure shelter space because city shelters are over capacity or inaccessible to people with disabilities. These facilities are often breeding grounds for illness. How many of you have pets? Many homeless people do as well. These people are forced to choose between going into the shelter or keeping their best friend.

The Denver Homeless Camping Ban was passed on May 23, of 2012. The ban was introduced into Council’s Land, Transportation & Infrastructure Committee, instead of the Health, Safety, Education and Services Committee where it more naturally fit. This was done to assure that it would garner enough positive votes to be sent to the full City Council. The proposed ban would likely not have passed through the Health, Safety, Education and Services Committee by traditional procedures.

The Denver Homeless Camping Ban makes it a crime for any person to shelter him or herself from the elements while residing on any type of public and or private property, without appropriate permission. Under the same law, it is illegal for homeless individuals to sit, sleep or rest for an extended period of time. Additionally they are not able to set their belongings down inside the Denver City limits.

Fines can be ninty-nine dollars, and there is the potential of a year in jail, if an individual decides to not to move. With nowhere to go, this ordinance unduly punishes a person for not having a home.
The homeless citizens in Denver are constantly harassed by business owners, city politicians, city officials, and police officers. Being harassed and bullied is a constant reality for them.

City of Denver, we have tried to work with you. We have asked you to repeal the camping ban. How do you respond? You announced that starting Tuesday March eighth, 2016 you would be seizing all the homeless belongings. That you would be forcing everyone “away” who camps in the area around Samaritan house and surrounding blocks. Currently at least 75 people live outdoors in this area every night and a hundred more stay in this area during the day. People who have made the best home they can out of tarps, sleeping bags, and if they are lucky, tents, will be forced to leave. They have the added burden of confiscation of their survival gear which is taken to a far off location with some vague promise of retrieving it from the police, if they can jump through all the hoops. Even if this survival gear, their ID and valuable belongings are retrieved, the city says they cannot return to this area to camp.

Homeless people living in public space have no choice for survival but to use tarps, sleeping bags, tents and other materials for shelter. This currently violates the urban camping ban. The meager belongings that folks use for survival will be confiscated leaving them with nothing to use for their daily needs. This is a violation of their human rights. This, as the U.S. Justice Department has stated, is cruel and unusual punishment. We are demanding that Mayor Michael Hancock put an immediate stop to this sweep.
Denver city officials say, “no shelter has turned away any homeless person wanting to enter” and “there is room for all those currently staying outdoors to stay in the shelters. This is simply not true. The City lists just under 1,500 emergency shelter beds and mats. The 2015 Point In Time Count, known to be an undercount, counted 3,456 people experiencing homelessness in Denver city limits on one night. That is 9 people for every 4 shelter beds. Bottom line, if every homeless person sleeping on the streets of Denver tried to stay in the shelters tonight there would not be room. Thereby your urban camping ban violates the U.S Constitution.

Our request to stop the ban on urban camping has gone unheeded. No effort has been made to provide temporary “open-space” like Seattle has done. Your confiscation and destruction of the belongings and survival gear of the homeless is inhumane and criminal. We watched in dismay as your police removed people from their tents and shelters during a snow storm. We will not ever forget that image.
Therefore, consider yourself warned. You will immediately place a moratorium on enforcement of the camping ban. You will in good faith return the possessions confiscated to their owners. You will provide an open space to set up a temporary camp while a permanent solution is found.

We have had months to prepare our legion for the upcoming efforts in Denver. We would prefer to negotiate and work peacefully toward a solution. Your failure to work in good faith with local activists will bring the formidable power of Anonymous to bear on your city.

A very public spotlight is about to be shined on you Mayor Hancock and your sycophant, Councilman Brooks. The entire world will see what heartless people you are. Every member of the downtown partnership who supported the camping ban will also be doxed and their information posted for the world to see. We would prefer you worked with local activists on a solution. Our resolve is immeasurable. You will provide for the homeless one way or another. They are part of your community and deserve to be treated humanely. We trust you’ll make a good decision.

To The Tattered Cover Bookstore,

It has come to our attention that you recently expressed issues with the community feed and boycott of your establishment. You expressed confusion and anger towards peaceful protesters feeding and distributing donations to homeless individuals. You stated “Quote” Why is the Tattered Cover being singled out?

Because we have refused to cave into their demand to take a public stand against the overnight camping ordinance,…”end quote”. You are confused. We want you to relinquish your public stand SUPPORTING the camping ban through membership with the Downtown Denver Partnership.

As you are aware the camping ban makes it illegal for people without a home to be homeless. Sleeping is a part of living. It is an act that must occur at some time, in some place. You say “quote”The Tattered cover is a member of several organizations (for a variety of professional reasons, and, like many individuals may be in agreement or disagreements from time to time with their decisions or actions. Including the Downtown Denver Partnership and Aclu… why choose to to point out one membership and omit the other.”end quote”

The first word that comes to mind is hypocritical, the second is selfishness. Hypocritical. If you believe in something or stand for something do you also stand for the polar opposite of your position. To in anyway support the Urban Camping Ban is immoral. By doing so you are oppressing the homeless individuals who are already struggling to survive in ways many can not begin to imagine.

In stead of doing nothing (which is much less than doing something to help these individuals, you “do something” or are a “part of something” that takes direct action against them. Selfishness. It seems to us you are simply playing both sides for your own benefit. No humanity for others simply your own benefits in mind unmoved by those who are impacted by your actions.

We will state it simply. These are our demands. Remove yourself from the Downtown Denver Partnership, or be a voice in the group that stimulates the movement for the Downtown Denver Partnership to no longer support the Urban Camping Ban. You stated “The Tattered Cover does not take a public position, pro or con, on matters of public policy unless those policies impact reading, readers rights, access to content or, on rare occasion are of internal importance to the book industry.”

Would the Tattered Cover take a stand if people were being killed or attacked and left to die on your door step? Can you truly not see this is exactly the act that is happening and Tattered Cover decides to take no stand, no opposition for crimes against human rights? As long as this is how you respond to acts against humanity, we will be at your doorstep making others aware of how you feel about this community, and your lack of effort to defend it. Hope this helped answer your questions. See you next Friday. We will be watching closely. Operation Right To Rest has focused on Denver and you are rapidly approaching our sites. Ask the Partnership how their last week has been.