Violence, alcoholism, and obesity pose the biggest risks in America, but the rest of the world isn’t doing much better. 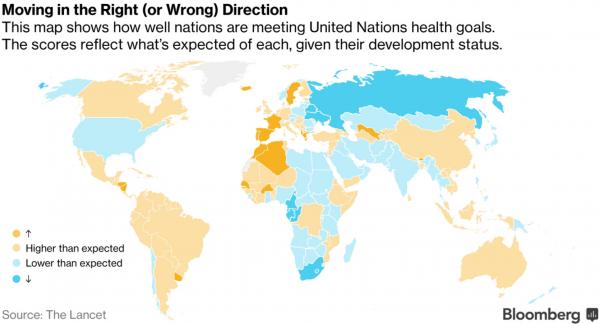 As Bloomberg reports, Iceland and Sweden share the top slot with Singapore as world leaders when it comes to health goals set by the United Nations while America has slid to 28th place, according to a report published in the Lancet. “Using the UN’s sustainable development goals as guideposts, which measure the obvious (poverty, clean water, education) and less obvious (societal inequality, industry innovation), more than 1,870 researchers in 124 countries compiled data on 33 different indicators of progress toward the UN goals related to health.”

The massive study emerged from a decadelong collaboration focused on the worldwide distribution of disease.

About a year and a half ago, the researchers involved decided their data might help measure progress on what may be the single most ambitious undertaking humans have ever committed themselves to: survival. In doing so, they came up with some disturbing findings, including that the country with the biggest economy (not to mention, if we’re talking about health, multibillion-dollar health-food and fitness industries) ranks No. 28 overall, between Japan and Estonia. 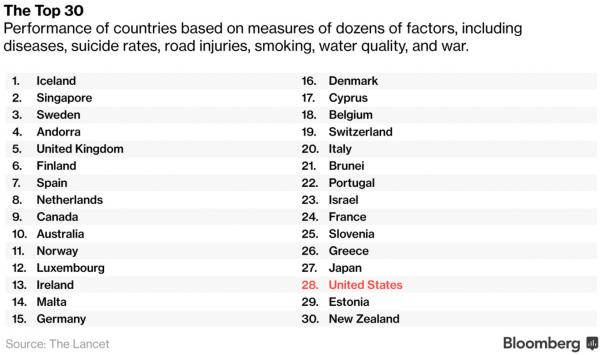 Bloomberg notes that the U.S. scores its highest marks in water, sanitation, and child development. That’s the upside. Unsurprisingly, interpersonal violence (think gun crime) takes a heavy toll on America’s overall ranking. Response to natural disasters, HIV, suicide, obesity, and alcohol abuse all require attention in the U.S. Also noteworthy are basic public health metrics that America doesn’t perform as well on as other developed countries. The U.S. is No. 64 in the rate of mothers dying for every 100,000 births, and No. 40 when it comes to the rate children under age five die. 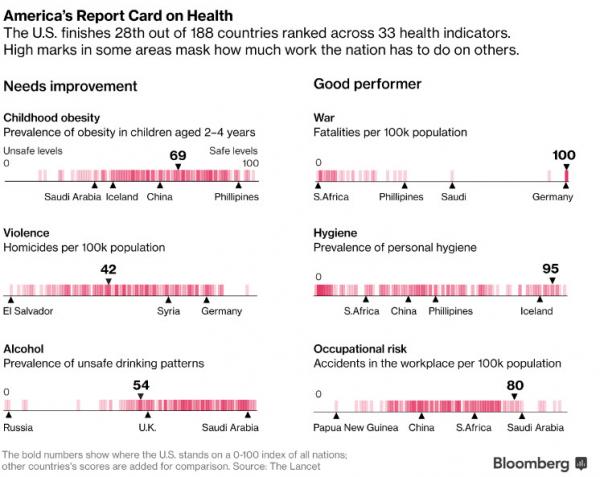 “The U.S. isn’t doing as well as it perhaps should compared with some countries in Western Europe,” Murray said.

Finally, it’s an oldie, but a goodie…