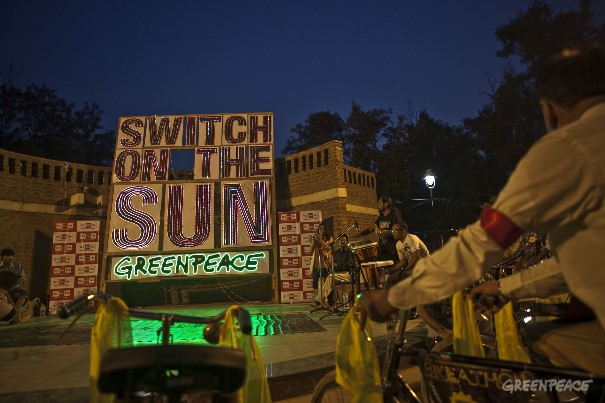 Hundreds of people on 25 stationary bicycles switched on the sun on World Environment Day on June 5 at Dilli Haat in Delhi. Delhites came together and pedalled away to claim their right to sustainable energy in a first of its kind bike-a-thon organised by Greenpeace in association with 92.7 BIG FM. The event was an attempt to highlight that Delhi residents have the capacity to generate their own uninterrupted and clean supply of electricity by installing solar panels on their rooftops.

Stationary cycles were connected to electrical circuits that generated electricity when people cycled and this lit up the message- “Switch on the Sun”. The bike-a-thon was a part of Greenpeace India’s renewable energy campaign urging the Delhi government to initiate strong fiscal and policy measures to promote renewable energy in the Capital.

The residents of Delhi, outraged with power cuts and false promises, joined this innovative event demanding a people oriented renewable policy. The young and old were more than happy to pedal for power and create awareness about harnessing the sun’s abundant energy. Delhi Drummers, a group of percussion musicians provided a backdrop of beats to urge the cyclists on. Beatboxers entertained the crowd as the renewable energy message lit up Dilli Haat.Akshey Kalra, Mobilisation Campaigner, Greenpeace India says, “Delhi has immense potential in terms of solar energy and the power of the sun can negate the rising power tariffs, prolonged power cuts and the ever increasing gap in demand and supply of electricity. 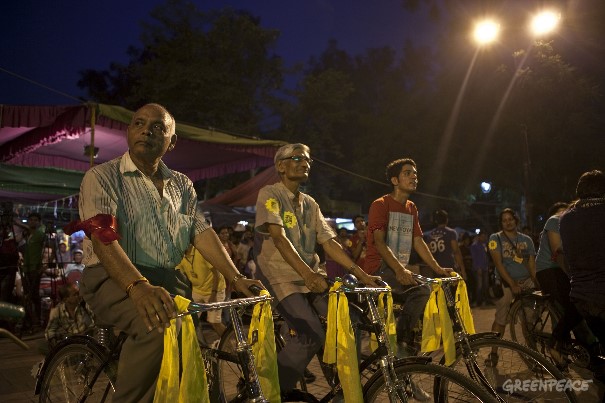 Delhi has been at the forefront for clean energy for its transport, then why can’t they take lead in clean energy for people as well. All that the government needs to do is introduce a pioneering policy on solar roof top that will encourage people to use this infinite source of energy.”Delhi had performed abysmally in a Greenpeace India ranking of all states on their renewable energy supply in the total energy mix. The report titled “Powering Ahead on Renewables: Leaders and Laggards” (http://www.greenpeace.org/india/Global/india/report/2013/powering-ahead-with-renewables.pdf) shows that Delhi is one of the worst performers despite being the national capital and aspirant to be a world class sustainable city. After setting an very low renewable energy target of 3.4% Delhi achieved only 0.01% in 2012!

The bike-a-thon created a forum for people to learn about how they can utilise their rooftops and generate their own electricity by investing in solar technology which will truly energise Delhi. National Service Scheme members, cycling groups like Delhi Cyclists and Pedal Yatri, school and college students, resident welfare associations, senior citizen groups, and other supporters attended the event.

Anshuman Sood, a cyclist from Anand Niketan and participant at the bike-a-thon says, “During summers we curse the sun and the heat, but surprisingly, we never realise that this energy can be diverted to light up not just Delhi, but the whole country. I am here to pledge my support for this campaign because I truly believe that renewables can power this country’s ambitions. Moreover, this is such a unique way to educate and inform people about solar power.”

Over 300 people attended the bike-a-thon supporting renewable energy and a future where coal is not our primary source of energy. Currently over 75% of Delhi’s electricity comes from coal-based thermal power plants. But coal mining is destroying forests in Central India, displacing indigenous communities and threatening wildlife. This is the cost of the electricity we enjoy.The people in Delhi understand these facts and are ready for alternatives especially solar power on their roof-tops. It’s an ideal time now for more support and strong policy measures from the government. This will encourage individuals to generate their own electricity benefiting us all while also protecting the environment.