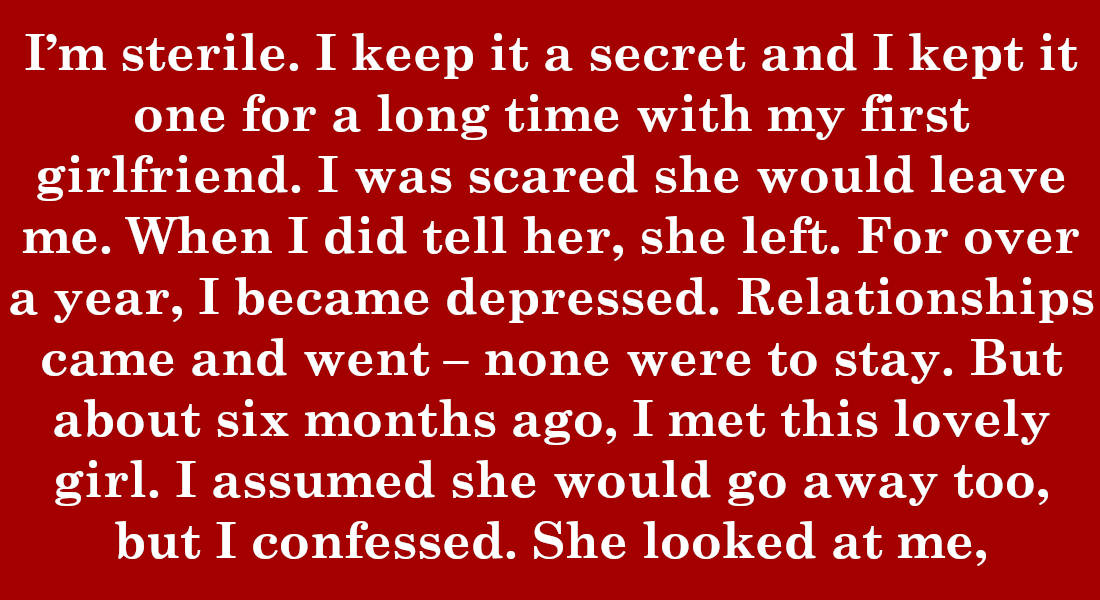 Falling in love may not be the hardest thing in life. But staying in love and maintaining a relationship while fighting off all the challenges that come in your way – that is the test of real love. When you are in a relationship, it also helps to learn a bit more about love from others.

Here are 9 short stories that will show you the value of love:

1. Once upon a time, I was helping this old lady with her shopping bags. She was really grateful but she also told me if I would be kind enough to walk her back home too. She was in a hurry as her husband was waiting for her. I agreed and as we were closing in on her house, I noticed a blind man standing outside it. He approached me, took the luggage, and took the hand of his wife. It was a scene that changed me and made me realize how lazy I was when I did not want to pick up my girlfriend from the station.

2. I was just 19 when I had to lose my leg. Back then, I was dating a wonderful girl. After losing my leg, my love decided to go abroad to earn money. I understood – there were boundaries that every relationship had, after all. So, I mentioned that we should take a small break. It was better for both of us. I knew that she would be gone. But a month later, she was there, standing outside my door. She cried and told me that she had been looking for prosthetics in different hospitals. She just wanted to earn money and so, she took a job abroad. The money was for prosthetics. I was too bewildered – I hugged her and cried.

3. My elder sister had married a guy who is quite picky regarding his food. Whatever he ate, he would not stop criticizing it. When my sister would cook chicken liver for him, he would just praise it as if the food was out of this world. Turns out he was allergic to chicken. He ate it anyway because he loved my sister.

4. After the birth of our son, the vision of my wife worsened. She used to wear glasses but now, it got really terrible. I did not want to see her suffer that much, so I took on a second job as well as some online assignments – worked day in and day out. I did not get enough sleep for a whole year. But I saved a lot – enough to get my wife a corrective eye surgery. When she returned, she was stunned at her eyesight. She was able to see everything crystal clear. I don’t mind the hard work. Now, I have a son and a content wife – they are more important to me than the whole world.

5. My mother has a heart problem and she had to remain under supervision. So, when my father was away for work, I stayed with my mother, looking after her. She had grown pale and thin, but she was so beautiful. But her hand was shaking a bit. Father had come back yesterday, so we were waiting for him to arrive any time now. As soon as we heard the lock turning, my mother got up and dashed to the door, and hugged my father. She mumbled a few words to him. He hugged her tightly too. His love was her medicine.

6. I got in touch with a funny and handsome boy on the internet. Well, the internet is not very reliable but somehow, we had a spark. We Skyped for a few years and I knew I loved him. He loved me too. I wanted to meet him but he was too afraid to do so. So, I traveled miles to meet him and found out that he was disabled. He was not capable of walking. We stayed together for about three months and now, we are happily engaged.

7. I’m sterile. I keep it a secret and I kept it one for a long time with my first girlfriend. I was scared she would leave me. When I did tell her, she left. For over a year, I became depressed. Relationships came and went – none were to stay. But about six months ago, I met this lovely girl. I assumed she would go away too, but I confessed. She looked at me, smiled and mentioned that we could just adopt in the future. I knew she was the one.

8. I was diagnosed with a brain tumor when I was eighteen. I don’t believe in keeping secrets from my boyfriend, so I told him. If he chose to leave, I’d understand. But he just smiled and said, “When pigs fly!” He stuck on and supported me till the end. The tumor was benign. We married, and now, at 21, we have a wonderful daughter. I’m grateful for his support.

9. I was dating this privileged girl once. She was beautiful and also funny, but she was rich. She had everything which could fulfill her desires. We got engaged too. One day, I met with an accident that left me partially paralyzed. I knew that she would leave. But that privileged girl transformed. She took care of me the whole time and sacrificed several ‘essential’ things. She even learned to make meals for me and she did not want me to apologize – for anything. Nor did she show any sign of fear or disgust towards me. I can proudly say, I’m a lucky man.

Love in unfavorable circumstances makes it even more beautiful. How did you find these short stories?