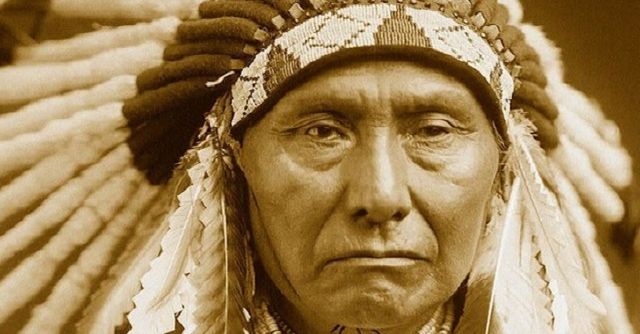 As tensions boil on the international stage, eight U.S. cities in two months abolished a federal holiday that has long insulted and infuriated the indigenous population and many others — Columbus Day — but that’s not all. These eight cities (including three just last week) then replaced much-maligned October 12 “holiday” with one long overdue: Indigenous Peoples Day.

Here’s the rundown of U.S. cities that decided a brutal imperialist might not be an appropriate figure to celebrate:

In an official declaration of the transformation of the second Monday in October to Indigenous Peoples Day, the city made “an effort to reveal a more accurate historical record of the ‘discovery’ of the United States of America” by recognizing“the occupation of New Mexico’s homelands for the building of our City.” This year, Albuquerque is encouraging businesses and individuals to “reflect upon the ongoing struggles” of the indigenous population “and to celebrate the thriving culture and value” of their societal contributions.

Haskell University students — representing 151 tribal nations — have been trying since September for implementation of Indigenous Peoples Day. Their endeavor finally paid off on October 6th at a City Commission meeting, where Mayor Mike Amyx announced that in order to observe “that the city of Lawrence was built upon the homelands of the Kansa and Osage people” and that “Indigenous peoples’ intellectual, spiritual, and deep cultural contribution has enhanced the character of the City of Lawrence.”

Haskell Indian Nations University’s Student Senate President Christopher Sindone called the transformation a move toward unity. Expressing surprise, he said, “For them to pass something like this, as a city, from being at Haskell, that’s 180 years of resiliency by Native Americans recognized.”

Portland City Council last week announced an outcome tribal leaders had pursued for over six decades: Instead of Columbus Day, by a declaration, October 12, 2015 will be Indigenous Peoples Day. In an interview with local station KOIN-6, tribal chairman of the Confederated Tribes of Grand Ronde, Reyn Leno, said of the largely symbolic declaration:

“We’ve been here for hundreds of thousands of years, and we’ve been shy about telling our story. I think that has led the public to have a lot of interest in what we do. We’ve been working hard to tell our story and the story of all Native Americans, and this is just one more movement toward getting that accomplished. You can pour all your concrete and lay all your gravel and blacktop, but these are still the lands that our people walked.”

In August, St. Paul City Council passed a resolution intended to “reaffirm the commitment to promote the well-being and growth of St. Paul’s American Indian and Indigenous community” by celebrating Indigenous Peoples Day instead of Columbus Day on the traditionally designated second Monday in October.

With language similar to other cities’ resolutions of the holiday, city officials recognize that St. Paul was built “on the homelands of the Dakota people” and that “indigenous nations have lived upon this land since time immemorial.”

“The city of Anadarko strongly supports the proposition that Indigenous Peoples Day shall be an opportunity to celebrate the thriving cultures and values of the Indigenous Peoples of our region,” stated Mayor Kyle Eastwood in a mid-September meeting in Anadarko City Hall’s council chambers. Apache, Choctaw, Delaware, Wichita, and affiliated tribe members and leaders attended the reading of the full proclamation to replace Columbus Day with Indigenous Peoples Day — a proposal originally brought by Chamber of Commerce Executive Director and Choctaw Nation member, David Scott.

“We are only able to learn from our past when we learn the facts,” said Eastwood. “I hope this step will be the beginning of our learning from history when it comes to the role indigenous peoples played and still play in the creation of this wonderful country.”

He added this was an opportunity to put past differences aside because “Anadarko does best when we work together.”

Replacing that contentious federal holiday’s spot on October’s second Monday, Indigenous Peoples Day will henceforth be celebrated by the City of Olympia, answering a request filed in October last year. An August 17th rally at Heritage Park saw member representation from the Squaxin, Nisqually, Quileute, and Quinault Nations deliver speeches and join in traditional songs to an audience of nearly 150 people standing in support of the measure.

Indigenous Peoples Day is meant to celebrate the contributions of the Squaxin, Nisqually, Quinault, Puyallup, Chehalis, Suquamish, and Duwamish tribal nations and their influence on the city.

The City of Olympia does not recognize or celebrate Columbus Day.

At the beginning of September, Alpena Mayor Matt Waligora proclaimed October 12th would be called Indigenous Peoples Day to facilitate a productive relationship based on mutual respect and trust between the city, the Saginaw Chippewa Tribe, and all indigenous people in the region.

The proclamation was to be read during the celebration of the cultural and societal contributions of the area’s indigenous peoples, taking place over what is traditionally Columbus Day weekend, October 9th through the 12th.

These eight cities follow Minneapolis and Seattle in creating official recognition for Indigenous Peoples Day. Oklahoma City attempted to pass a similar measure unsuccessfully in September, but plan to try again on October 13th — the day after Columbus Day.