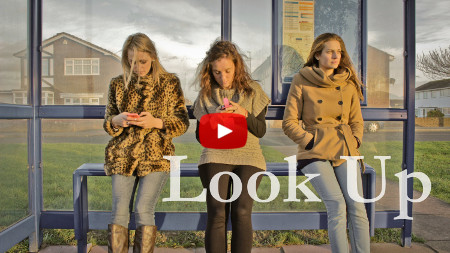 For those of you who watch my show, you may have seen the episode from last season when I threw Kidd Cole’s cell phone into the river. What you don’t know is that I would have been just as satisfied, if not more so, throwing my own phone in the river.

It’s amazing that I can find enough ways to waste hours a day looking through Instagram, Twitter, Snapchat and Vine. I don’t hit the Millennial average of 8-10 hours a day, but sometimes it gets so bad, I’m on the verge of deleting all my accounts. Seriously, I really think about giving up my phone and all my social media accounts every day. The only reason I don’t is because there’s a little voice in my head that constantly reminds me how followers are currency in the biz these days and that if I want to be relevant and socially influential, I need a platform.

I’m not alone, we all look at our cell phones too much. The stats don’t lie: the average person checks their phone 110 times a day. Even when I’m not using my iPhone, I might as well be because it’s always in my pocket, calling to me: Nev, Nev why aren’t you posting to social media? Look at what everyone else is posting. Check your email. Neeeevvvv.

What did people used to do? Especially when they were at a red light or walked down the street before cell phones? These days, you’d be hard pressed to find someone by themselves or even with someone else, sitting at a table for a meal, who is not fully engrossed in their phone.

Don’t get me wrong, cell phones are also amazing. I love that everyone can record potential news stories through them and that revolutions can be organized leading to governments being overthrown. But advancing to the next level on Candy Crush isn’t going to change the world.

Plus, my thumbs hurt. All the time. I have a twinge of soreness and pain and I’m not the only one. I’ve heard stories about “text thumb” and “text claw.” Perhaps the ultimate proof? “Blackberry thumb” now has its own Wikipedia entry. Not to mention, “text neck” and the generation that will be hunchbacks because they’re always looking down at their phones. Seriously, the facts back me up: tilting your head a mere 15 degrees to look at your phone puts 27 pounds of pressure on your spine. That kind of wear and tear often ends in surgery.

Our phones are killing us. Whether they cause cancer remains to be seen, but here are some proven ways that they are harming our health. For one, they cause chronic pain in the neck, back, hands and elbows. Secondly, they cause digital eye strain which means two thirds of Americans experience irritated eyes, blurry vision and migraines. Thirdly, they cause sleep disruption, which can lead to high blood pressure and Type II diabetes. Fourth, the average cell phone is 18x dirtier than a public toilet – in fact one in six iPhones has fecal matter on it – and those viruses, bacteria and germs cause sickness. Fifth, cell phones cause one out of four of the nation’s car accidents. Finally, the WiFi radiation from phones kills sperm. So cell phones are not just killing you but your future offspring too.

Moreover, we are paying hundreds of dollars a month for these death machines!

The cost of our addiction is more than just physical and financial, however. An equally sad consequence of our out of control devotion to our phones is that we are no longer comfortable with being present in the moment, even at such a beautiful, ephemeral, event as live music. I mean, have you been to a concert lately? I see people on their cell phones recording and sharing the show instead of enjoying the music. What happened to the “you had to be there” days? When you were actually required to go and experience something for yourself before everybody was sharing it from their phones.

In fact, a video went viral earlier this year that communicates this concept in a very powerful way. It’s called “Look Up”.

As scary as it is, I’m not surprised. After all, if you’re like me, the first thing you do when you wake up and when you go to sleep is spend at least 30-45 minutes on your phone.

Surveys say I’m not alone: three out of four people use their phones in bed, 12% in the shower, half of all Americans bring their phone to meals. That’s pretty darn relationship-y, don’t ya think?

So what can we do to transform this obsessive, self-destructive relationship into a healthy one?

For starters, consider how much you use your phone and every time you reach for it to fill a few minutes of time, consider looking around to see if there is somebody you can talk to instead. If you’re going to use your phone, at least try to use it for something meaningful. Find interesting people to follow on Twitter or read national news or commentary at places like ATTN.

On a practical note, clean your phone with antibacterial wipes, don’t sleep with it, and try to hold it up so you don’t crane your neck and stress your back.

Change starts with you. And if this article hasn’t convinced you that we need to change our relationship to our cell phones, go watch Black Mirror on Netflix. It’s a startling reminder of how close we are to a dystopian future.